This is not a ghost story, but a real life story of a headless chicken who had the will to live for another 18 months after his head got cut off, he made it on the Guinness book of world records. 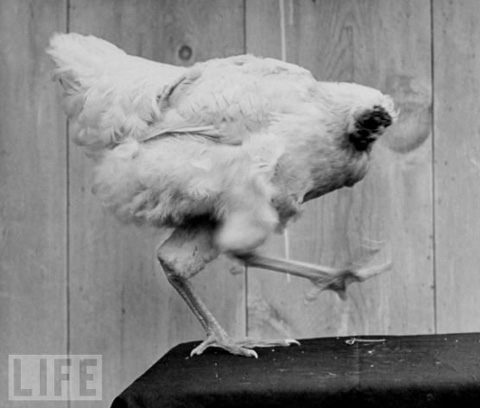 “I’ve been running around like a chicken with it’s head cut off” is the line that I used a lot lately, but no more after reading this story.  Mike, the chicken with his head cut off lived in the US during the mid 40s, and here I read about him in Koosang Koosom Magazine written in Thai language.

When I first read about it, I couldn’t believe of how can a chicken with his head cut off  continued to live for another 18 months, that’s crazy. I had seen a chicken with its head cut off when I was little living in Thailand, and it would dance around for  a couple of minutes and I guess that’s where the above term came from. 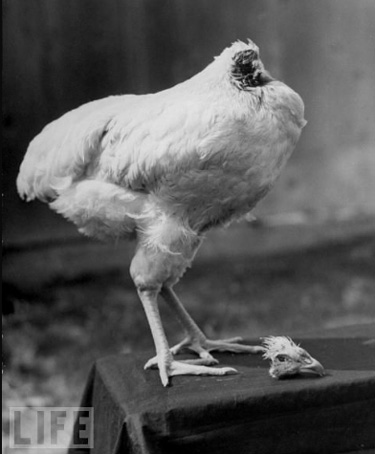 This is a true story from miketheheadlesschicken.org, and photos from LIFE:  September 10th, 1945 finds a strapping (but tender) five and a half month old Wyandotte rooster pecking through the dust of Fruita, Colorado. The unsuspecting bird had never looked so delicious as he did that, now famous, day. Clara Olsen was planning on featuring the plump chicken in the evening meal. Husband Lloyd Olsen was sent out, on a very routine mission, to prepare the designated fryer for the pan. Nothing about this task turned out to be routine. Lloyd knew his Mother in Law would be dining with them and would savor the neck. He positioned his ax precisely, estimating just the right tolerances, to leave a generous neck bone. “It was as important to Suck-Up to your Mother in Law in the 40’s as it is today.” A skillful blow was executed and the chicken staggered around like most freshly terminated poultry.

Then the determined bird shook off the traumatic event and never looked back. Mike (it is unclear when the famous rooster took on the name) returned to his job of being a chicken. He pecked for food and preened his feathers just like the rest of his barnyard buddies.

When Olsen found Mike the next morning, sleeping with his “head” under his wing, he decided that if Mike had that much will to live, he would figure out a way to feed and water him.

With an eyedropper Mike was given grain and water. It was becoming obvious that Mike was special. A week into Mike’s new life Olsen packed him up and took him 250 miles to the University of Utah in Salt Lake City . The skeptical scientists were eager to answer all the questions regarding Mike’s amazing ability to survive with no head. It was determined that ax blade had missed the jugular vein and a clot had prevented Mike from bleeding to death. Although most of his head was in a jar, most of his brain stem and one ear was left on his body. Since most of a chicken’s reflex actions are controlled by the brain stem Mike was able to remain quite healthy.

In the 18 MONTHS that Mike lived as “The Headless Wonder Chicken” he grew from a mere 2 1/2 lbs. to nearly 8 lbs. In a Gayle Meyer interview Olsen said Mike was a “robust chicken – a fine specimen of a chicken except for not having a head.” Some longtime Fruita residents, gathered at the Monument Cafe for coffee, also remember Mike – “he was a big fat chicken who didn’t know he didn’t have a head” – “he seemed as happy as any other chicken.” Mike’s excellent state of health made it difficult for animal-rights activists to garner much of a following.

Even now the town of Fruita celebrates Mike’s impressive will to live, not the nature of his handicap. Miracle Mike took on a manager, and with the Olsens in tow, set out on a national tour. Curious sideshow patrons in New York , Atlantic City , Los Angeles , and San Diego lined up to pay 25 cents to see Mike. The “Wonder Chicken” was valued at $10,000.00 and insured for the same. His fame and fortune would earn him recognition in Life and Time Magazines. It goes without saying there was a Guinness World Record in all this. While returning from one of these road trips the Olsens stopped at a motel in the Arizona desert. In the middle of the night Mike began to choke. Unable to find the eyedropper used to clear Mike’s open esophagus Miracle Mike passed on. 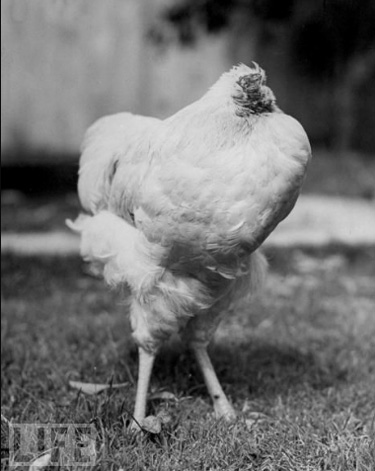 9 thoughts on “Mike the Headless Chicken”