I had never seen a real life Hummingbird before, only in pictures or videos until I visited Bo’s friend’s horse stable.  She has a hummingbird feed of water sugar and I sat there for a while before getting these pictures.  It was late in the evening, so some of the pictures are not as clear and the Hummingbirds are super fast so it’s hard to capture them.

This is a nice video by John Reiser, there are several hummingbirds that patronize a feeder in his parents’ backyard. Filmed in the Pinelands of New Jersey.

I also found some interesting information about Hummingbird from Wikipedia.  Hummingbirds are birds in the family Trochilidae, and are native to the Americas. They are among the smallest of birds. They can hover in mid-air by rapidly flapping their wings 12-90 times per second (depending on the species). They can also fly backwards, and are the only group of birds able to do so, it‘s very neat to see them in action.

Hummingbirds feed on the nectar of plants and are important pollinators, especially of deep-throated, tubular flowers. Like bees, they are able to assess the amount of sugar in the nectar they eat, they reject flower types that produce nectar which is less than 10% sugar and prefer those whose sugar content is stronger. Nectar is a poor source of nutrients, so hummingbirds meet their needs for protein, amino acids, vitamins, minerals, etc. by preying on insects and spiders, especially when feeding young.

Most hummingbirds have bills that are long and straight or nearly so, but in some species the bill shape is adapted for specialized feeding. When hummingbirds feed on nectar, the bill is usually only opened slightly, allowing the tongue to dart out and into the interior of flowers, with that long bill, I guess they must have a very long tongue. 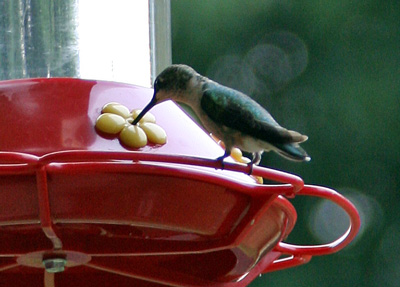 Hummingbirds do not spend all day flying, as the energy cost would be prohibitive, the majority of their activity consists simply of sitting or perching. Hummingbirds feed in many small meals, consuming many small invertebrates and up to five times their own body weight in nectar each day. They spend an average of 10-15% of their time feeding and 75-80% sitting and digesting.

They are so pretty to look at, I’m thinking about putting a hummingbird feeder out in my garden.