One of Bo’s friends has a horse stable in her backyard, he had mentioned about getting the horse manure for my vegetable garden before but I’m just not so sure about it, might be okay for flowers, grass and trees, I guess that wouldn’t be so bad, but for vegetable garden, I might not be able to think pass the manure part when I eat, this one is caught in action.

Seeing these horses made me think back to my first and only time riding a horse. This was over 10 years ago, my company had an outing for the supervisors and lead persons to go horseback riding and since I work closely with them, I was invited to come along. When we got to the horse stables, the owner asked me if I have ever rode one before, I said no, but I had experiences riding a water buffalo when I was little.  Everyone started laughing, I looked around and didn’t think it was funny, and sure enough it’s about the same to me. I had no problem steering the horse, it’s the same concept as steering the water buffalo.

Bo’s friend used to have 8 horses, but since the economy take a nosedive, she had to get rid of some and only has 5 horses now.  She has several Mustangs, they are often referred to as wild horses because they are free-roaming horses. She only has one Stud (male), the dark Grey one below, he is fenced in by himself because she doesn’t want them to breed, and the rest are Mares (females).  She is offering riding lessons for those that are interested, and right now she has one little girl.  Lee is interested in taking a riding lesson, I recalled she loves riding on the horse at the county fair and this might be good for her. 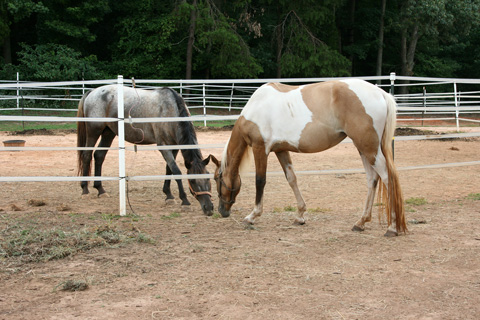 Her horses are beautiful, this one is a Corridor horse, and one of her eyes is damaged, she was injured and her previous owner didn’t get her treated in time, but she can still see through that eye.

She is a Mustang, very feisty. 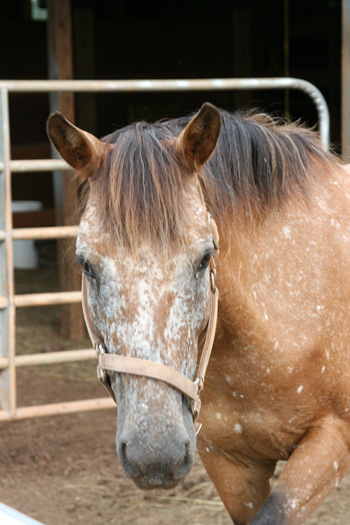 This one is punished for missed behaved, she is not happy being locked up.

This one is also a Mustang .  She has beautiful prints on her body, they look very much like a map. 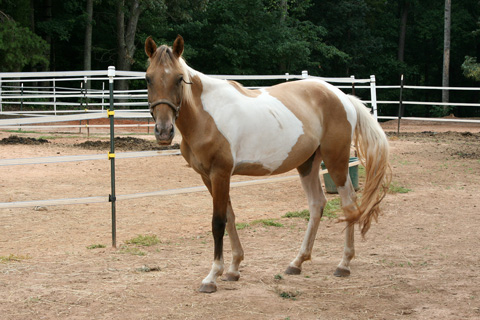 So this is what country living is like, I noticed that her neighbor raise some sort of chicken, Bo calls it Kai Tok in Pasa Lao.

Believe it or not, there is still a restriction living out in the country, she said that the housing ordinance would not allow them to raise pigs, I don’t see how it’s that much different from raising horses.

These are her neighbor’s ponies, they’re very small, might be a better choice for Lee to ride on. I told her this and she said, “What! Why do I have to ride on baby?”