I’m a bit surprised that it snow today, a bit gloomy and I feel like telling a ghost story, check out at the bottom of this post.   Even though it’s gloomy, but it’s very pretty to look at.

I’ve not heard back from my oldest sister, she is extremely busy at this time of the year, and was looking for a song for lady0fdarkness and came upon a collection of some Thai classical music, I would say that this is the types of music for your third ears because music isn’t meant for just our ears only, it’s also the food that nourishes our heart and soul.

When I listen to this song below, it made me think of only one person, and Thoranee Kansaeung is a funeral song, loosely translated as Mother Earth shielded the light.  The last time I saw her alive was on Thanksgiving of 1999, we were visiting her family at the time, and her husband was dying of cancer.  She was looking for this song to be played at his upcoming funeral because the doctor said that he only had less than 2 months to live.  Right before Christmas, my sister called me at work and said that she passed away, I kept repeating on the phone, “must be some sort of mistake, it’s her husband that you’re talking about.”  Sure enough, there was no mistake, they all thought she had a cold or bronchitis, but by the time she got to the hospital it was too late.  They didn’t get to play this song at her funeral, but they did play it at her husband’s funeral, sadly he passed away in January 2000.

Max hates the rain, but he loves snow. 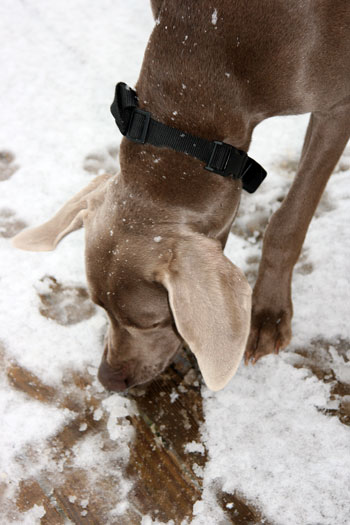 They said that when you’re dying, you’re living in both world, the chaotic and the spiritual world, I don’t know how true this is.  Back to the story of the couple above, while she was sick, her brother had a house warming party at his house not far away, and she attended the event, but her husband was too ill so he stayed home with their daughter.  That night, he heard a commotion of people marching into the house, dressed in a very primitive way, holding knives, bows and arrows and they were looking for someone.  They looked at him, marched right passed him, and couldn’t find that person so they left.

When I spoke to their daughter, she said that she didn’t see anything nor anyone, but her dad was bewildered, looked around, and kept asking her of whom these people were and what they’re doing here.  She had goosebumps, and kept telling her dad that there were no one here, except for him and her.  At the time we kind of thought that they might be the angel of death, or Lao people called it Yom Praban coming to get him, but come to think of it now, we believed they came to get her, but couldn’t find her at the time because she wasn’t home, so she lived on borrowed time for a couple of days.

Whilst I was visiting her, she mentioned about a Lao guy that recently passed away.  He was living with his friends at the time, and died unexpectedly in his sleep.  According to the owners of the house, a young Lao couple said that the house was haunted.  There were noises of doors opening and closing, and the water faucet got turned on by itself, and then the lights were flicking on and off in the middle of the night.  There were foot step noises that were very disturbing.  The young couple got scared and moved out.

It sounded to me like he didn’t know that he was dead and still carrying on his normal daily routines.  She said shortly after his funeral, she saw him standing outside her window, and waived to her.  Her 3 years old grandson was with her at the time, and he started to cry and said ‘Phee! Phee!’, which means ghost in Lao language.  He claimed that he saw a ghost, a very scary looking one, but she saw him as a person, and he looked very normal to her.  Very strange indeed,  I often wondered why certain people can see ghost or spirit and others can’t.

We went back to her funeral, it was a 7 hours drive from where we live.  Laotians have several nights of funeral service, and part of the ceremony was at the house, and I had to help cared for one of the grandsons, the 3 years old boy.  One of the nights, they carried in a decorated bed for the ceremony through the front door, and the boy sat on my lap and we were sitting adjacent to the front door.  He was trying to get up, but I got a hold of him first, and asked where he was going.  He said to his grandma, she was standing at the font door smiling at him.  This boy was sick at the time, so his eyes were sunken and his head seemed bigger than normal, and he has that ‘happy smile look’ on his face, very eerie to look at.  I stared at the opened front door, but there were no one there, but I could picture her standing there smiling at him and at me.  They said that young children can see spirit, there might be some truth to this.

The night before he passed away, his wife’s brother was there with him.  It was late in the night, and he heard his brother in-law carrying on a conversation with someone that appeared to be his deceased wife.  He told her that he can’t go with her right now, that he had to wait for their son to come home, he worked third shift.  By the time the son got home, they had to call the ambulance, and he passed away before he got to the hospital.  This was such tragic, but this is what I called soulmates.