After we visited Wat Ban Na Muang, we then visited Wat Nong Bua, also known as Wat Prathat Nong Bua located in Ubon Ratchathani. The temple is famous for having the only example in Thailand of a Buddha Gaya-style stupa. The stupa consists of a central stupa with a smaller stupa at each corner of the compound wall. This style of stupa with a small golden chedi on top is named for Maha Bhothi Wiharn at a famous temple in Buddhagaya India,  the holy birth place of the Lord Buddha. Within the central stupa, are several important Buddha images (Source). They are doing some restoration work when I visited.

The stupa also features local Isan arts. On the four corners of the pagoda base are garuda sculptures below a seven-headed naga. 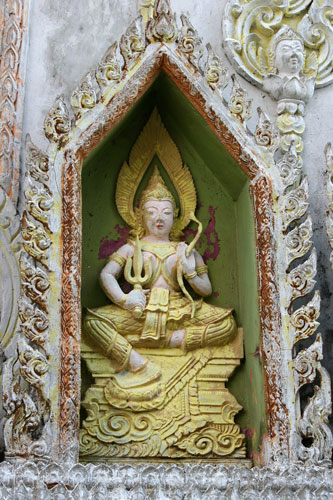 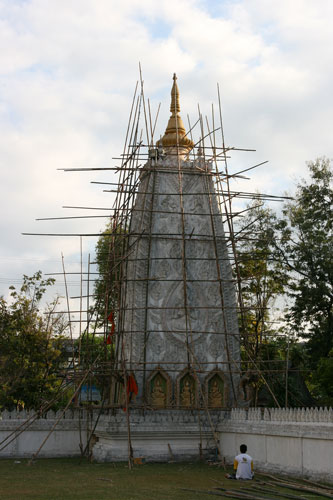 There are also Mara figures below eight monk figures, these motifs are repeated on all four sides. 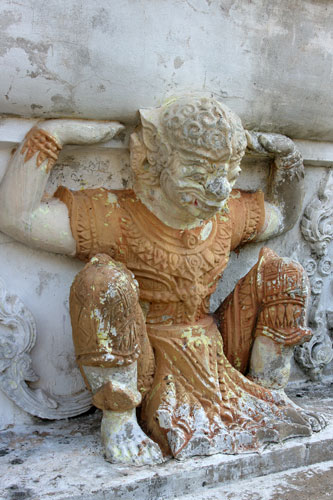 Nagas are placed at four corners of Prathat Nong Bua. 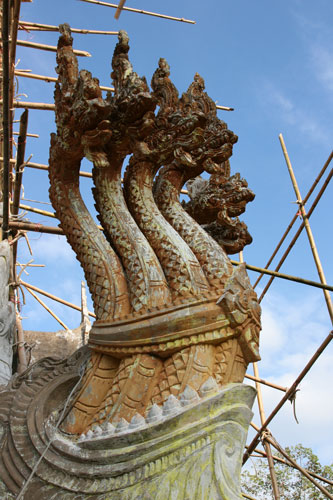 And below is a figure that made me think of the national symbol of Thailand and royal symbol, which is the Garuda, a mythical half bird, half human figure, a steed of the Hindu god Vishnu.

The temple hall is built with a three-sided gable style with a beautifully decorated arc-shaped roof and houses a Reclining Buddha image. 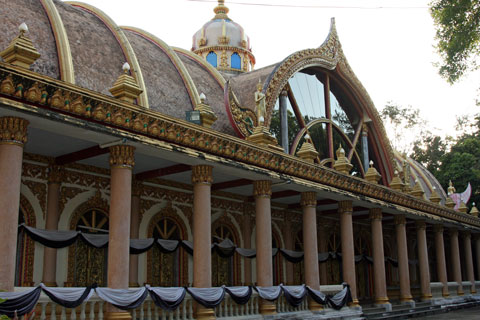 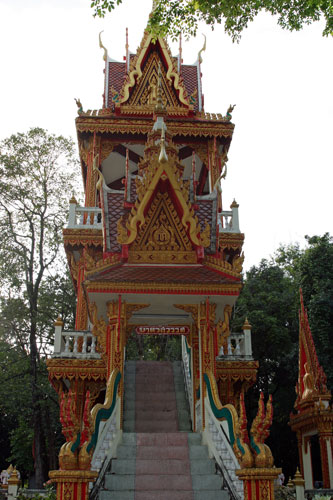 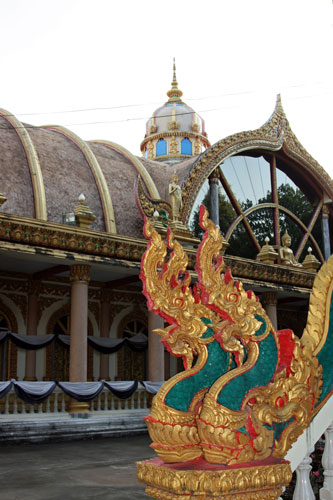 I believed that I’ve seen Bodhi tree at every temple that I visited, whether in Laos or Thailand.

I’m not surprised to see white elephants here (in this case, painted pink) because the term derives from the sacred white elephants of the Southeast Asian monarchs in Thailand, Burma, Laos and Cambodia. It is believed that to possess a white elephant was regarded, and is still regarded in Thailand and Burma as a sign that the monarch was ruling with justice and the kingdom was blessed with peace and prosperity.

Ubon Ratchathani is known for their elaborate traditional parading of candles to the temple.  It’s called the Haetian, or Candle Festival that often held around the days of Asanha Puja which commemorates the Buddha’s first sermon, and Wan Kao Pansa, which marks the beginning of Vassa or the Rains Retreat where monks would stay at their temple during the rain season from July to October.

The photos below were taken from the International Wax Sculpture Parade 2007 at Ubon Ratchathani by tum-TAT at Flickr.