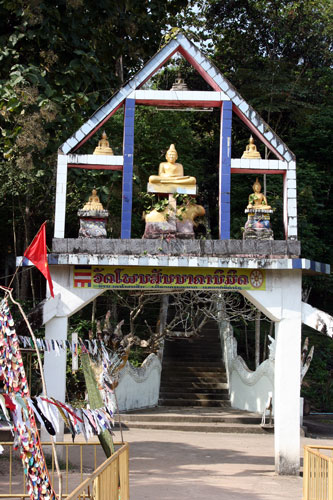 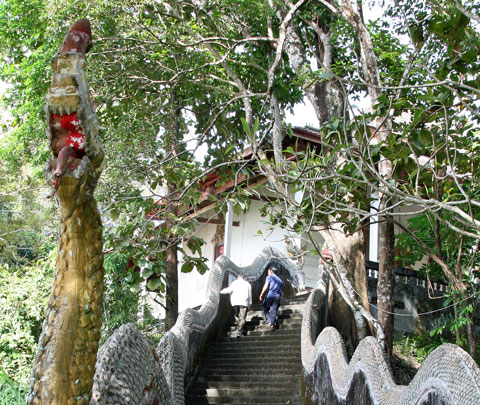 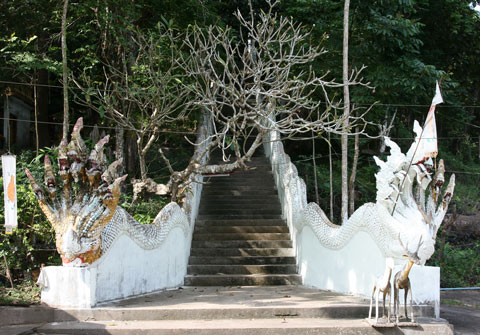 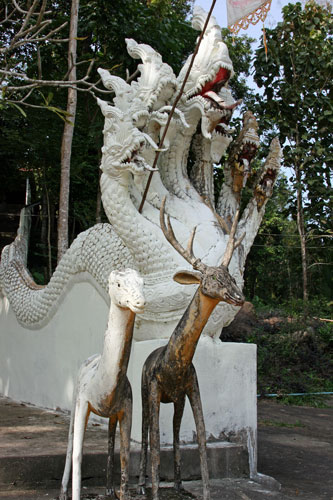 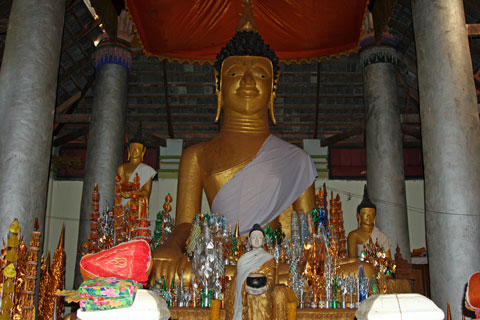 Wat Phonsanh just like the name suggested sits on top of a hill (Phon means hill), approximately ½ or less mile from Wat Prabath, and along the Mekong River. It’s almost ironic of how I realized that this is the temple that I had been searching high and low, and asked my Aunt as soon as I got to Paksan.  I guess because of my limited knowledge of the temple in the area, I was looking for a temple with the story of Phrayanark or Naga, and I knew that there is one in Paksan, but I thought that the main gate entrance would have Naga symbol, and comes to find out, there are many temples that resemblance the description of the temple that I gave her, but yet I knew it was not the right temple after I visited.

When I first saw the stairway entrance from the Mekong River, and the rails with the Phrayanark or Naga design, I was certain that this must be the temple. I asked my cousin that took us there, if this is the temple that has the legend of Phrayanark to come up every year.  He looked at me as if he heard me asking the question for the first time, and said that this is the temple, and that in the past years, Phrayanark came up, but this year he didn’t. 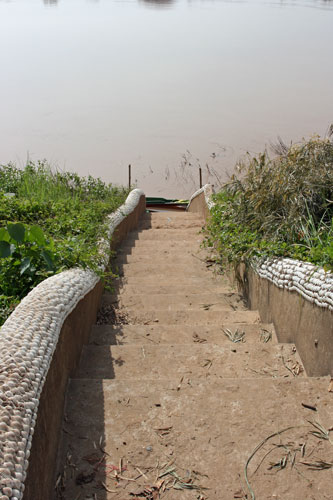 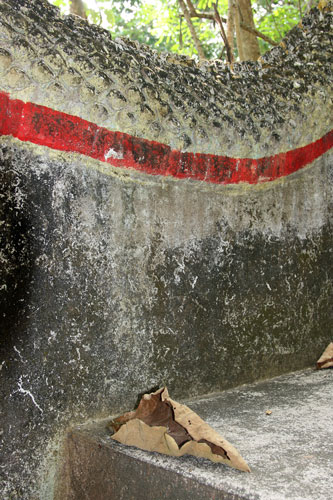 My cousin is talking about the small and bright fireballs shoot up from the Mekong river.  The phenomenon which is still scientifically unexplained is called Bang Fai Phrayanark or Naga’s Fireballs, and usually happens on the first full-moon night of October coinciding with the end of Buddhist Lent.  The locals believe the fireballs come from a mystical Naga or Phrayanark living in the Mekong River who is spitting them high up in the air.  Some scientist assume that the fireballs might be caused by bubbles coming up from a combustible natural gas deposit in the river bed which ignite when shooting up, and many now believe that it is just a hoax, regardless, the story of Bang Fai Phrayanark or Naga’s Fireballs still fascinates me.

Below is a photo by vlauber, it’s a gathering to watch for the Naga’s fireballs, celebrating the end of Buddhist Rains Retreat in 2007, small reddish balls of fire that rise from the river, and the photographer saw three!

According to wikipedia, the legend of the Naga is a strong and sacred belief held by Lao and Thai people living along the Mekong River. Many pay their respects to the river because they believe the Naga still rule in it, and locals hold an annual sacrifice for the Naga. Each ceremony depends on how an individual village earns its living from the Mekong River, for instance, through fishing or transport. Local residents believe that the Naga can protect them from danger, so they are likely to make a sacrifice to Naga before taking a boat trip along the Mekong River. 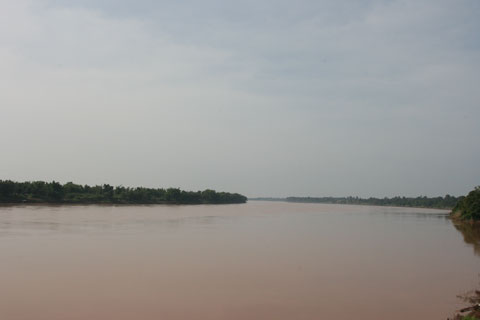 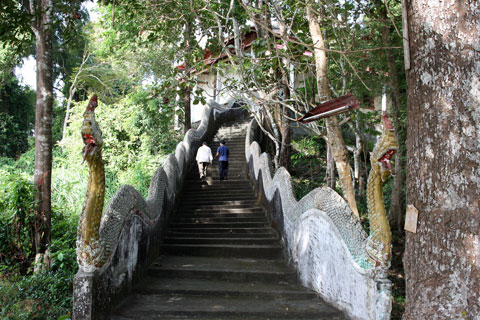 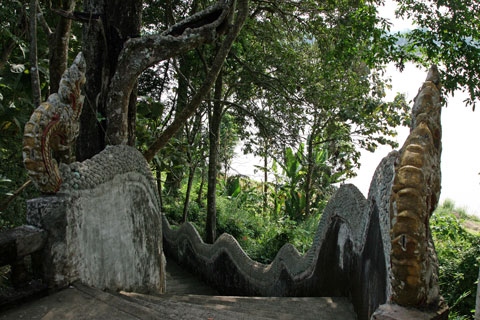 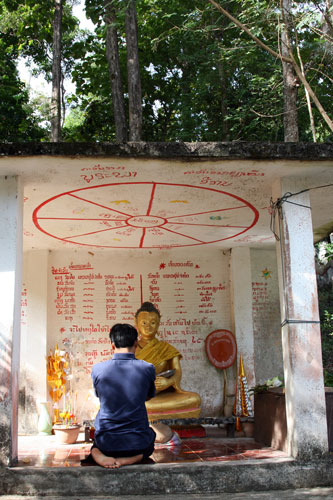 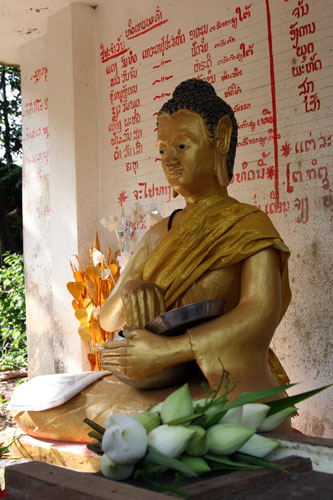 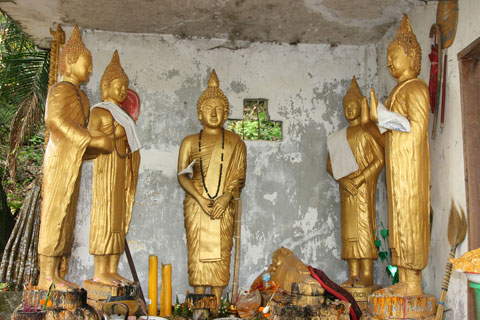 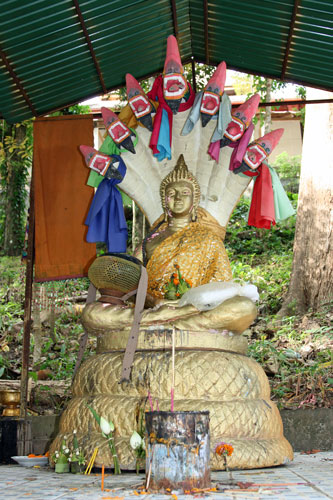 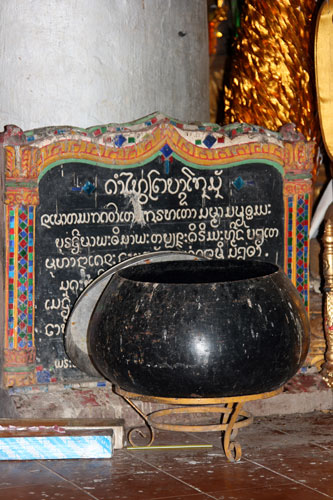 Extremely old That or Monument. 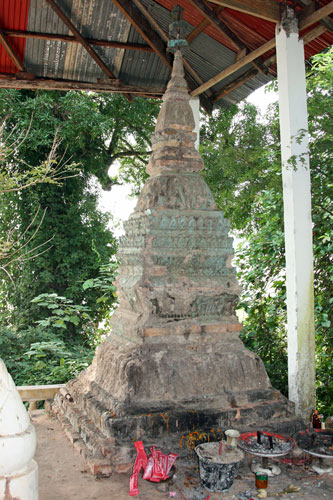 This is where you make a wish and lift the statue, and if you are able to lift above your head, then your wish will come true, some said to do it 3 times. 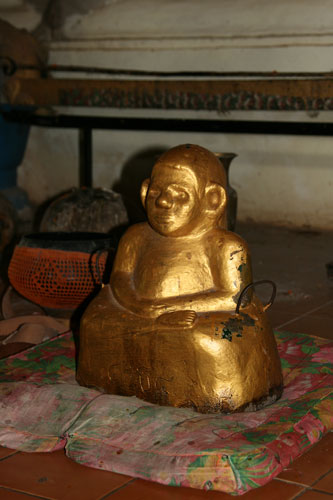 Another place for wishing and fortune telling, place your donation in the donation box, and make a wish, you’d then shake a cup full of sticks, either let one falls off on its own or you pick one out, and each stick has a number at the tip, then you look for the paper with your number, most people believe that this is an accurate account of your future fortune. 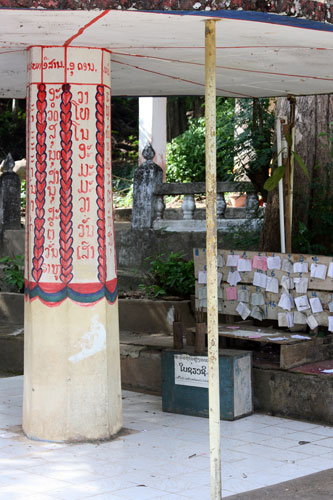 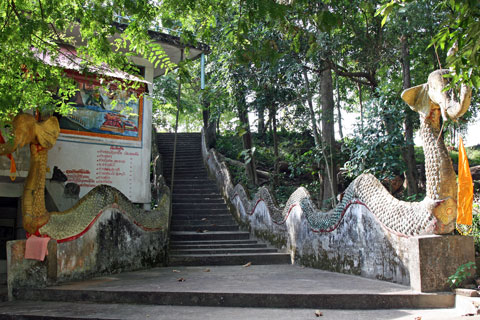 A local lady selling flowers and incense sticks for worshiping. 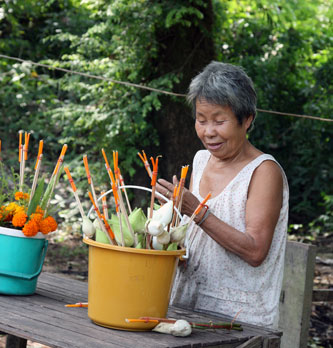 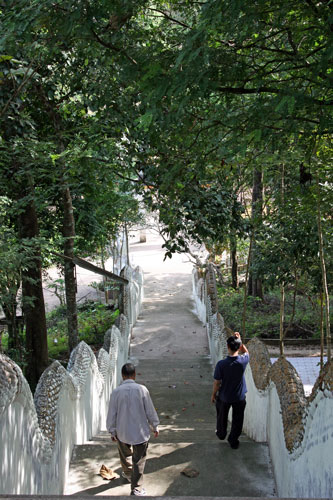