I visited the former Royal Palace, or what is now known as the National Museum on November 14, 2008.  It is known locally as Haw Kham (Ho Kham) or the Golden Hall, and was built between 1904 and 1909 as the new official royal residence for the monarchs of Luang Prabang. I believed the Mekong River is right behind it, and it faces Mount Phousi, and the best view of the former Royal Palace is of course from Mount Phousi. 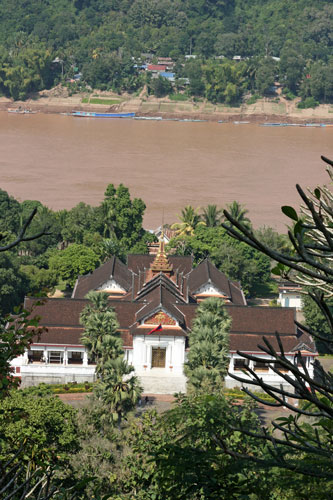 As for the entrance fee, I had to pay 5,000 kips ($0.59), and if you’re Laotian, it is expected of you to were sinh (Lao traditional tubular skirt), and as for me, since I didn’t have mine with me, I ended up renting it for 2,000 kips ($0.24), I believed this is our way to show respect. I had to check my bag before entering, as we’re not allowed to bring our camera, purses, or bag inside, picture taking is not allowed inside the National Museum.

As I stepped inside, the former Royal Palace is still very grand to me, somewhat empty in my humble opinion and I have a feeling that many items had been removed, and what we’re seeing now is not what it once was, but the presence of the royal palace is still there, and what I imagined it to be buzzing with servants at one point in time is now buzzing with tourists, curious to see what the former Royal Palace looks like.

The Haw Pha Bang (Ho Pha Bang), Royal or Palace Chapel, is located at the northeastern corner of the grounds of the Royal Palace Museum. Although it is a new structure, it is built in the traditional style and is tied directly to the history and traditions of this World Heritage City. The Haw Pha Bang has been designed as the permanent home/shrine for the Pha (or Pra) Bang, Luang Prabang’s namesake and most sacred image. The image, brought to Luang Prabang in 1359, earlier had places of honor in various city wats (including Wisunalat and Mai). Most recently it has been on display in the Royal Palace Museum from which location it is carried to Wat Mai for ritual cleansing during the city’s New Year’s celebration.

How strange it is for me to see a motorcycle parks in the rear of the building, I’m wondering if this was allowed back in the olden days.

In the back courtyard, there is a huge Bodhi tree.

Inside this Royal Cars Exhibition, there are several vehicles that are displayed:

A Citroen Circa 1950s which was once King Sisavong personal car for informal trips.  It was later replaced by the Lincoln Continental.

Edsel mid 1950s, another Ford made car from the US government, the Edsel was used by King Sisavong and King Sisavang Vatthana for formal occasions, such as official visits,  only the king and queen rode in this car.

Lincoln Continental mid 1950s was used by both King Sisavong and King Sisavang Vatthana.  This car was used exclusively to transport distinguished royal guests in Luang Prabang.  The car was a gift from the US government.

Lincoln Continental mid 1960s, this was the royal family’s personal car.  King Sisavang Vatthana, his wife and children rode in it to informal events like temple visits, social gathering or casual trips and town.  It is manufactured by Ford Motor Co., the car was a gift from the US government.

Jeep was a gift from the Japanese government to Prince Vongsavang and Princes Minilay, 1972 manufactured by Toyota Motors.

Sea Horse 35, for the King to ride to orchard, manufactured by Johnson Motors Canada 1956.

The front courtyard is well maintained with lushes tropical plants. 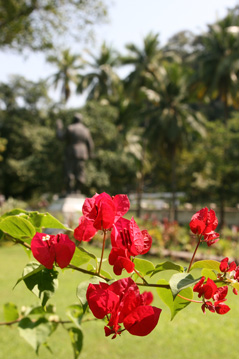 The National Museum was built of brick and stucco instead of traditional materials, the main building is a blend of Laotian and French Beaux Arts architectural ideas and motifs that sought to symbolize ties between Luang Prabang and the ruling French colonial government. It was primarily designed by the French and built with a large number of Vietnamese workers, the building has two separate cruciform-style sections linked by the large throne room; perimeter exhibition galleries surround each of the sections. There have been a number of changes since its original construction; its steeply pitched roof, central Lao-type spire and the breadth of its façade were later additions and modifications. French architects originally had planned a European spire over the throne room, but King Sisavangvong (who even had studied in Paris), successfully insisted that it be Lao-style. There are classical style columns and a number of pediments reflecting European influence, though there is Lao style decoration and Lao style brackets between the roof sections and the exterior walls of the building. After the dissolution of the monarchy in 1975, the building was reopened as the National Museum, though the ‘royal’ and ‘palace’ designations still frequently are used. It remains a graceful and attractive, though not ostentatious, building.

The front section of the museum that formerly contained the official reception rooms now is the main exhibition area. The entry hall, once devoted to religious ceremonies and activities, still reflects the central position Buddhism in the former Lao kingdom and shows the intertwining elements of religion and the monarchy. There is the dais of the former supreme patriarch of Lao Buddhism and a diverse variety of Buddha statues. The king’s former reception room to the right contains busts of the last three monarchs, murals of traditional Lao scenes painted by the French artist Alix de Fautereau in the 1930s, and several fine lacquer screens by Thit Tanh (a gifted local artist) that depict the Lao Ramayana, among other treasures. Other front rooms contain gifts from foreign leaders and governments, including some lunar rocks presented by President Richard Nixon. In the right front corner of the palace, standing in the place of honor in what was the king’s former shrine room, is the sacred paladin of the city, the Prabang. (It is scheduled to be moved to the elaborate Haw Pha Bang chapel during the Lao New Year festivities in April 2006). The room also holds ancient Khmer sculpture, intricately carved ivory tusks and other valuable relics.

The throne room has red walls with intricate glass mosaics dating from the 1950s that celebrate the 2500th anniversary of the Buddha entering nirvana. The room also has a variety of royal paraphernalia, including elaborate swords and scabbards, the king’s personal howdah (elephant saddle) and religious artifacts including precious Buddha images (including some 15th and 16th century gold and crystal Buddhas from That Makmo, the Watermelon Stupa of Wat Wisunalat).

In the rear section of the building are the five rather simple rooms of the monarch’s private quarters, largely preserved as they were left when the last (though uncrowned) monarch, Sisavang Vatthana, occupied the residence. There are the king’s and queen’s bedroom, dining room and library. One now contains an exhibition of Lao music and dance. Photographs are not permitted in any part of the interior.

There are a number of other buildings on the palace grounds, including a theater, conference hall, garage, boathouse, as well as the ornate Haw Pha Bang.