Sexy Peter Peppers, if you’re thinking of a Thai singer/model/actor Peter Corp Dyrendal (from Lyn’s Lakorn Blog), no…not quiet, but I’m sure he looks very hot and sexy to many out there.

I’m a big fan of strange stories, and odd stuffs, and people that know me would often think of me when they see strange things, or hear of strange stories. I posted about A Coco de mer or Is It a Sexy Coconut? in the past, and back then I thought it looks very odd, very exotic, Mother Nature has her way of creating and sculpturing things. Then I heard of Peter Peppers, someone gave me one and it looks very odd, I was going to take a picture of the one that I have, but I found some good pictures by CaptCuervo at Flickr, see what you think…

I found some interesting reading about Peter Peppers at peterpeppers.com, which reads,

It is a curious little pepper, the Peter Pepper. Some say it’s sexy. Some say it’s hot. Others say it is delicious. No matter who you are, you will agree it is an unusual Cajun pepper.

The Story of the Peter Pepper

The fiery little Peter Pepper has long been considered too hot to eat! Native to Louisiana and Texas, this blistering capsicum forms pods which naturally and consistently contort themselves into a miniature replica of, well – take a look at its scientific name: Capsicum annuum var. annuum ‘Peter’ (Penis Pepper).

These interesting peppers are certainly a conversation piece for the gardener who has everything! Seeds are almost impossible to obtain, and most plants are grown from much coveted “private stock” – plants grown year after year for seeds alone.

Actually, the word pepper can be confusing here. The familiar black or white pepper is a product of Piper nigrum and that is an entirely different plant! Peter Peppers belong to the genus Capsicum. The name Capsicum comes from the Greek kapto, to bite, an allusion to the hot, biting taste of the fruits. Some capsicums are sweet, some are hot, others are mild, and they all have unique shapes and culinary uses. Famous cousins of the Peter Pepper include the tabasco pepper and the jalapeno. However, Peter Peppers are hotter than the tabasco and at least 10 times hotter than the jalapeno.

I need to ask my dad to see if he wants to plant the Peter Pepper next year, but I don’t know how to go about doing this (It’s somewhat embarrassing,) maybe I will show him the one that I have.

I betcha it would taste good with long string beans spicy salad. 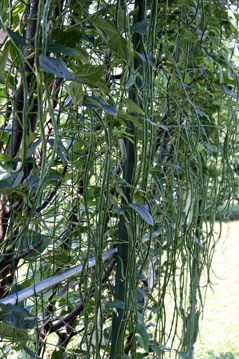