Wasabi helps fight cancer, but today most of us are eating the imitation wasabi

I read an interesting article in Koosang Koosom Thai Magazine about wasabi, also known as Japanese horseradish. I’m not a big fan of Japanese food, especially raw fish, I tasted once and I didn’t like the texture, and it might be up in my head also, the thought of it being raw. The wasabi (green paste) helps, but the strong spicy mustard taste made my eyes watery, so it appears as if I was crying whilst eating my meal (when people see me, they must have thought to themselves, must be that good.) I guess you can say wasabi is a major part of Japanese cuisine.

I did a bit more reading and discovered that it has medicine factor, might be like some of our food, ‘Wan Pben Lom, Kom Pben Ya’ (sweet is the wind (not sure why, might referring to sweet talk), and bitter is medicine.)

According to Wikipedia, recent studies have also shown that wasabi contains a natural chemical that can be used against certain cancer cells. This unique root vegetable can also be used for oral hygiene and infections. It has been suggested that wasabi can help prevent cardiovascular diseases like stroke, heart attack, and hypertension. The health benefits are many. This root can help with diarrhea, osteoporosis, asthma, arthritis, and allergies as well.

Wasabi is a member of the Brassicaceae family, which includes cabbages, horseradish and mustard. Known as “Japanese horseradish”, its root is used as a spice and has an extremely strong flavor. Its hotness is more akin to that of a hot mustard than the capsicin in a chili pepper, producing vapors that irritate the nasal passages more than the tongue. The plant grows naturally along stream beds in mountain river valleys in Japan. 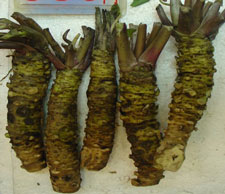 Wasabi is generally sold either in the form of a root (real wasabi), which must be very finely grated before use, or as a ready-to-use paste (horseradish, mustard and food coloring), usually in tubes approximately the size and shape of travel toothpaste tubes. Once the paste is prepared it should remain covered until served to protect the flavor from evaporation. For this reason, sushi chefs usually put the wasabi between the fish and the rice. 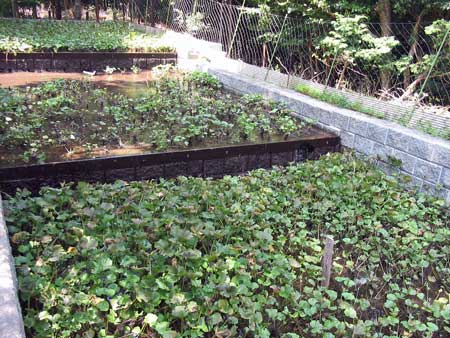 Fresh leaves of wasabi can also be eaten and have some of the hot flavor of wasabi roots. They can be eaten as wasabi salad by pickling overnight with a salt-and-vinegar-based dressing, or by quickly boiling them with a little soy sauce. Additionally, the leaves can be battered and deep-fried into chips.

The burning sensations it can induce are short-lived compared to the effects of chili peppers, especially when water is used to remove the spicy flavor.

Almost all sushi bars in America and Japan serve imitation (seiyō) wasabi because authentic wasabi is usually expensive, but it is becoming widely available even in the United States. Wasabi loses much of its flavor if exposed to air for even a short time, so genuine powdered wasabi, while it does exist, typically contains horseradish and other ingredients to approximate the nasal spiciness of fresh wasabi. Because of this, most powders use no real wasabi and instead turn to just horseadish, mustard seed, and green food coloring (sometimes Spirulina). Whether real or imitation, the powder is mixed with an equal amount of water to make a paste. Few people, even in Japan, realize that most of the wasabi that they consume is in fact an imitation. While not considered equal with the freshly grated product, preserved wasabi is available in tubes and, in larger quantity, frozen bags. Like powder, tubed wasabi often contains no real wasabi at all, so verification of the ingredients is needed.

To distinguish between the true variety of wasabi and the imitation product, real wasabi is known in Japan as hon-wasabi, meaning original or true wasabi. Local Sushi chefs usually substitute horseradish in Japanese restaurants.

Wasabi is often served with sushi or sashimi, usually accompanied with soy sauce. The two are sometimes mixed to form a single dipping sauce known as Wasabi-joyu. Legumes (or peas) may be roasted or fried, then coated with a wasabi-like mixture (usually an imitation); these are then eaten as an eye-watering “in the hand” snack.