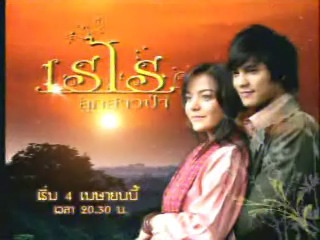 This is from Manager online, April 2, 2008, written in Thai Language, translated by Ginger.

She has recently become known to Thai people, and now Alexandra Bounxouei, a superstar from Laos has bid her fans farewell, and left for Japan on Tuesday, April 1, 2008, it will take her about 2.5 years to complete her study.

After the Lakorn ‘Pleng Ruk Rim Fang Khong,’ that was aired last year, Sandra has returned to Thailand once more to play in a lakorn, ‘Ray Rai Louk Sao Pa’ directed by producer Thongchai Prasongsun, which will be aired on Thai TV, channel 7 on April 4th and she will not be here to view the first episode.

According to work point Entertainment that claimed to have interviewed the superstar on the left side of Mekong River, this is what Alexandra said, “As a matter of fact, Sandra have been planning to study abroad for quiet some time, so everything is prepared in advance, including the time slots for ‘Ray Rai Louk Sao Pa’, let just say that after the filming of the last episode, Sandra will be leaving right away.”
Sandra will be studying Media Design at Keio University School of Media Design in Tokyo.

“Normally, Sandra like to learn about IT, especially in the Internet area because the courses that Sandra will be studying can be used to create a new technique, a new way of communication, as we can see that currently there are various ways of communication…”

“I’ll miss acting, and all my fans, many from the fan club don’t want Sandra to go, but for my future, I have to choose education first”

Even though Alexandra receives a warm welcome from her fans in Thailand, but she still receives harsh comments from her own people in Laos, even from the officials that mentioned that Alexandra should act more tradition, and not dressed too revealing, sort of verbally reprimanding her of how she is presenting herself is ‘not considered normal’ for a Lao girl to be hugging with a foreigner in a public places in front of other people.

As for the latter statement, it is believed to have come from the images of Alexandra’s romantic scenes with Thai actor from her previous Lakorn, which is not socially acceptable amongst the Lao culture.

Before this, Sandra was paired with Weir, but this time a new leading man, Cee Siwat, who has become a household name for Lakorn viewers, and the plot of these 2 Lakorns are totally different, from playing a role of a tour guide in ‘Pleng Ruk Rim Fang Khong’ to playing the role of ‘Ray Rai’ a daughter of a local forest villager, and another lead actor is Nom Rapeepat who plays the role of Priavanh, RayRai’s childhood friend that grew up together, which Priavanh has a crush on Ray Rai all these years, and they have many friends rooting for them that creates lots of fun and excitement, a Lakorn in the style of producer Thongchai Prasongsun.