This is based on a real life story in Koosang Koosom Magazine, by Bounsee written in Thai Language, translated by Ginger. 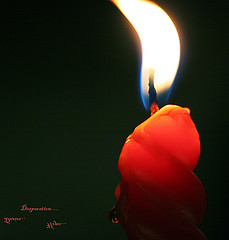 I’m originally from the northern region of Thailand, and the ghost story that I’m about to tell you is the story of my first cousin but first let me tell you about the tradition in our region. In our village, if there were death in the family, especially if it was the husband or the wife, then the elder of the village would perform a ceremony called ‘Kao Torg Dork Mai’ (rice and flower) immediately.

I once asked my grandmother as to why we have to perform this ceremony, and she explained that it’s a ceremony to separate the two, sort of like a spiritual divorce, because the one who died would live in a spiritual world as a ghost, and the other one is still living. If we don’t perform the ceremony then it is believed that the deceased spouse will come to take the living spouse to go live with him/her, which means if the husband dies first, then he’ll come and take his wife to live with him in the spiritual world. This is the belief in our region, which at first I was very skeptical about the whole idea until I saw it with my own eyes, it happened to my first cousin…this has made me a believer.

Ghing was my first cousin, she only completed middle school (mor 3,) and chose not to continue with her studying because she had a boyfriend living in the same village, his name was Chay, and if she decided to continue with her study, then she would have to leave home which would be quiet a distance from her boyfriend. Because she loved him, therefore had decided to forgo her education, which upset her parents tremendously because she was the only child. Ghing was determined to marry Chay, and her parents finally had to give in because they didn’t want to upset her. They knew he was not a good person, he liked to hang out at bars, and had many female friends that stayed with him often, and Ghing was aware of these situations and said that once they get married, then he will change and become a better person.

And after they got married, amazingly he did become a better person. The two were in love, I heard Ghing and Chay promised to one another before they got married that ‘If one was to die before the other, then s/he will come back to take the other to live with him/her.’

Shortly after they got married, Chay started to act strange, he got very thin, lost a lot of weight, and so was Ghing. The two went for their physical check up and both had contracted H1V and now had A1ds. As soon as her dad found out, he was furious and ordered them to separate, which Chay agreed and he admitted that he had A1ds before they got married but because he loved her and didn’t want her to have a new boyfriend.

After they were separated, Chay went back home to live with his parents. His condition got worse, and partly might be because he was depressed with his situation, he was forced to separate even when they were still in love. He had severe headache and had to smoke mar11juana to help alleviate the pain, and one day he might have had one puff too many that he couldn’t think straight…he hung himself. His relatives decided to cremate his body and only kept it overnight.

As for Ghing’s mom and dad, after they found out, they were worried about her, and told her that she had to accept that they weren’t meant to be together. It was hard on her but she was trying her best to deal with the situation; she told her parents that from now on, she would spend the remaining of her time with them.

The day that they took Chay’s body to the cemetery for cremation, they had to pass Ghing’s house; she told her mom that she didn’t want to see, and asked if she could be excused to her room, which her mom thought it was a good idea at the time. As the group were passing Ghing’s house, something strange happened, the pickup truck that carried Chay’s coffin would not move. The villagers came to help push but it would not budge one inch, Ghing’s mom thought it was rather strange.

As they were pushing the pickup truck, Ghing’s mom heard a loud thud coming from the direction of Ghing’s room. It sounded like something had fallen from a high shelf. Her mom ran to her room, and saw that Ghing had fallen off her bed facing downward. She turned her over and discovered that Ghing was dead.

From looking at her body, there were bruises around her neck, her tongue sticking out, and eyes wide opened as if she was frighten, shocked to see something before she died. He mom screamed for people to help, some came running from the front of the house, and others stayed with the pickup truck still trying to get it to move. Then they heard someone calling out, ‘The pickup truck is moving!’

The villagers believed that the pickup truck stopped in front of Ghing’s house because Chay came to pick her up; since her dad didn’t do a ceremony of ‘Kao Torg Dork Mai’ right after Chay’s death, which should have been done immediately. According to her dad, since they were separated, he didn’t think it was necessary but my mom seems to think that since both were still in love, and because of their promise of ‘who ever die first will come and pick up the other,’ in this case, Chay was keeping his promise; he came for her.

According to the autopsy report, she died of a lack of oxygen, possibly caused by pressure of strangle on her neck but strangely there were no fingerprints around her neck whatsoever. And from looking at her bed, it wasn’t that high because even my nephew that was 3 years old at the time was able to climb up and down with ease. At the time of her death, her mom was the only one inside the house, her dad was outside helping push the pickup truck, and there were no footprints of stranger when this happened.

Her death is still a mystery to all of us until this day. What do you think is the cause of her death?

5 thoughts on “The Promise”