This is a translated article from Koosang Koosom Magazine, written by Manop Keosanith written in Thai Language, translated by Ginger.

I’ve mentioned in part I that Goumonthong (golden boy or baby ghost) was a powerful being, and the most well known one was from the Thai legend of ‘Koun Changh Koun Panh’

….as the story goes, after Koun Panh (aka, Prie Keo) and Nang Boukrey, the daughter of Mernharn, became husband and wife, and shortly after that, she became pregnant. One day, Mernharn got upset with Koun Panh, his son in-law; therefore plotted to kill him by letting Nang Boukrey to put poison substance in his food. Luckily that Koun Panh has Hoong Pri (ghost spirit), and it warned him that his wife was trying to poison him, and not for him to eat her food, therefore saved his life. This outraged Koun Panh, he then seek revenged by plotting to kill his wife for her baby so he could make it into Goumonthong (golden boy or ghost baby.)

Before killing her, he had to ask his wife for her baby; this’s according to the instruction and guideline of how to make Goumonthong that the Goumon (dead baby) has to be given by both parents. Since Koun Panh was the father, all he needed was for the mother to give him her baby. So he asked her everyday for her baby. She thought it was rather strange because he was the father, why would he need to ask her for his own baby.

His persistence paid off, she got tire of hearing, and then one day she said that he could have her baby. This was all he needed to hear, her verbally given the baby to him, he was over joy and started plotting his next move.

Before killing his wife, he tricked himself into believing that he was upset with her for attempting to kill him, therefore she deserved to die because she was evil and backstabbing him. 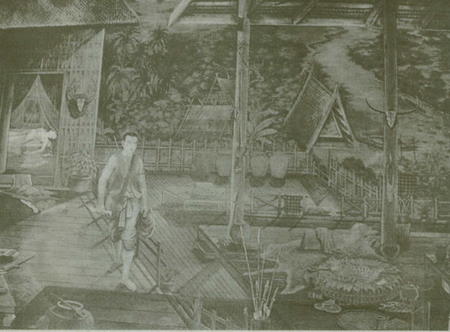 As he stood there by her side while she was peacefully asleep, he thought to himself, how evil could she be in attempting to kill him, has she no shame in herself. He held tightly to the knife that he’s planning to use, then he felt sorry for her but in a split of a second, the thought of her attempting to take his life was greater and he was convinced that she deserved to die.

He raised his knife high, and quickly lowered and plunged right into her heart, blood flew everywhere, she tried to fight him off with all her might, but no luck prevail. Once he pulled the knife out from her, blood gushing out and she took her last breath, her body laid there lifeless, in a pool of blood. He then cut her stomach open, pulled out her baby, and was elated when he saw that it was a boy.

He looked at the baby and said, ‘Goumonthong, my son, come and live with your father.’ With those words said, he then wrapped the Goumon (dead baby) in a blanket; he carefully placed the Goumon in his sack, and took off to a nearby Wat Thait (temple). He entered the temple and locked the door, and was ready to perform a ceremonial of the making of Goumonthong by means of black magic.

If you were to ask, what was Koun Panh’s Goumonthong duties? This I can answer, according to the Thai legend, he traveled alongside Koun Panh at all times, but was invisible so no one knew that he was there. He was able to warn Koun Panh in advance of the many dangers that they had encountered, and he can change himself into a human being.

In one of the scenes, Prey Chum, Koun Panh’s son left his grandparent’s house from Ayutthaya to visit his parents in Kanjanaburi, Thailand. Goumonthong then changed himself to a boy and traveled alongside with Prey Chum. They had many great adventures together, and he helped to protect Prey Chum until he reached his final destination, safe and sound. Goumonthong also acted as Koun Panh’s advisor, reminding him to be patient, which many times got him out of trouble.

The story of Goumonthong mainly came from the Thai legend of ‘Koun Changh Koun Panh’. When the author was little, many homes had Goumonthong, and it’d be open to the villagers to use the service, such as asking when to plant their rice, or vegetables, when would be a good season to buy land, and the list goes on. As time pass, the older generation died, and younger generations have had no interest in learning about Goumonthong, so the ancient tradition died, and as of right now, it’s almost non-existence.