Continued from Part I

This is a translated article from Koosang Koosom Magazine, written by Manop Keosanith written in Thai Language, translated by Ginger.

Those were the good old days, having faith or believing in Lok Grok (Lok Lort in Lao) was very common, but it’s rare in this day and age, but still exists. If you’re interested in seeing one, it’d be very difficult to find, not like back then where it’d be in many homes in the village. Today, you might even find yourself looking at animal Lok Grok, such as dog or cat that aren’t as powerful as human, but at least it’s still Lok Grok, I think by having one, you have nothing to lose.

Information provided about Lok Grok came from the central region of Thailand, whist Professor Prakhong Nimmanmirn has recorded in the year 2542 (1999) that,

“Lok Grok is an item that is being used by means of black magic, it’s made out of full term human baby, fully developed, but is extremely small in size (neonatal baby), and is deceased after birth and often times, both mother and baby died during the birthing process, this is what it’s called Lok Grok.

The mother or owner would then take this Lok Grok and sprinkle it with Ka Minh power (drying agent) that is golden yellowish in color to preserve the Lok Grok and it’s part of a drying process. This Lok Grok is then placed in a sacred location, whist the owner can worship and it’s believed that Lok Grok will bring them luck and prosperity. If by chance, there’s any bad omen or luck drawn near, then Lok Grok will tell or warn the owner in advance.” 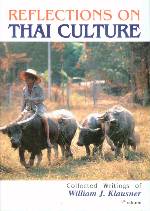 The story of Lok Grok has also appeared in the work of an American writer, William J. Klausner, in the book called “Reflections on Thai Culture.” He was born in New York City in 1929, has spent more than half of his life in his second home, Thailand. He arrived in Thailand in 1955 and spent a year of intensive fieldwork in a northeastern Thai village. This book was first written more than forty years ago, reflecting the more traditional side of Thai culture. It was then translated into Thai language in 2539 (1996) by the board of education known as Baby ghost, Lok Grok, or Goumonthong (golden boy) in one section of the book, it’s very interesting, which mentioned that,

“There’s one type of ghost that helps human, but it’s very disgusting looking, in the olden day, they called it Goumonthong (golden boy) or baby ghost. This type of ghost can be found in Laos or Issan region of Thailand. It’s born from a pregnant mother that died during birthing process.

They’d take this Lok Grok, sprinkle with drying agent, and place over an open flame to help speed the drying process. After this, then they’d perform a traditional ceremony of the making process of Lok Grok by means of black magic. I can truly vouch that it’s the types of ghost that would help the owner to become popular (Sa Nay), and according to the tradition of these regions, not all were good because there’re black magic involved.

The owner of Goumonthong (golden boy) would keep it by his side at all times; it’d protect the owner and warn if there’s any danger near. It’s believed that it could also make the owner invisible, truly remarkable item to have. (not word for word from the book, but translated from this magazine article written in Thai Language) “

As you can see, this was written by an American writer, it’s truly magical to have this item in your possession, and it’d help the owner in various ways and even warn of dangers or bad omens.