I think most Lao and Thai people have a Buddha mantle or ‘hing pra’ in their house, most house that I visited anyway. The ‘hing pra’ would be at the eastern part of the room or house. Some Lao or Thai people even have a room in their house just for Buddha statues; they called this ‘houng pra’. When I visited a temple several weeks ago, I’ve also noticed that there are many Buddha statues, and most temple have a room designated just for this. Some Buddha statues have rounded heads, commonly seen in Japan and some have pointy-heads, which is something that the Lao and Thai people are familiar with. One of the monks at the temple (Wat) explained to me that the pointy-head symbolizes bright, or smart (houw lam).

I’ve noticed that more and more westerners are using Buddha statues as art, decorating their house in Zen style, whether it’s out in the garden, inside a house, some even use it as a hat, or coat rack. I don’t know how some Buddhists feel about this, but I feel a bit sad that people misused the Buddha statues, to the point of abusive, in my humble opinion. When I see Buddha statues at a department store or a garden, I want to take them away from those places because I feel like they don’t belong there. I want to put them somewhere that is a bit higher than where they are, I guess it’s a bit selfish on my part but I just don’t like to see Buddha statues as a display or decorative items. I can’t imagine what kind of collection I’ll have if I end up buying all that I see. I guess if I have too many, I can always donate the statues to the temple and they can turn around and give it to those that truly want it for worshiping. My dad received a Buddha statue from a temple (Wat) not too long ago, of course you can’t buy anything from a temple, you have to ‘Bu Sah’, which means you make payment (or offering) in the form of donation, there’s no set amount, you give according to what you have, whether it’s $1, or $100, what you offer is up to you.

I’ve also noticed that many Lao and Thai people place their Buddha mantle at the eastern part of the room or house, the face of the statue facing the western direction. I don’t know if there’s a special reason why people do that. I’ve also noticed that most Laotian like to place the head of their bed toward the eastern direction. There might be a relationship between the two. My dad seems to think that if the head of your bed is toward the east, it’s for good luck and everything that you do will be prosperous, which I don’t know if there’s any truth to that. As long as I can remember, we never have to worry about which direction we have to place our beds because the east has always been the guideline for most of us.

Lao and Thai people believe that you should not point your feet toward adult or something high up, such as Buddha statue. This makes perfect sense that the Buddha mantle has to be at the eastern part of the room or house because the head of the bed is also toward the eastern direction. If the Buddha mantle is at the western part of the room or house, then when you are sleeping, your feet will be pointing in the direction of the Buddha mantle, and that can’t be a good thing. As for now, I’m happy with this explanation.

A note from Guess: Just thought I would share with you a photo of a little informal “altar” my wife has created in our guest bedroom where she can pray to Buddha. It would be fun to see photos of what different people have created in their homes.

Her Mantle is commonly seen in Laotian home, the jar on the right hand side is ‘nom moun’ (blessing water from the temple). Those papers are sacred ‘yun’ paper from different temples, but the red ropes according to her husband are for good luck.

The middle Buddha statue is called Pra Keo Mora Ghod, or the Emerald Buddha, she told me that if you’ve ever became a novice monk (male only, even if it’s for a short period, such as one day only), then you can ‘Bu Sah’ the statue from the Wat (get from the temple, and make payment in the form of donation). Her husband became a novice monk when his dad passed away, and once again when my mom passed away. 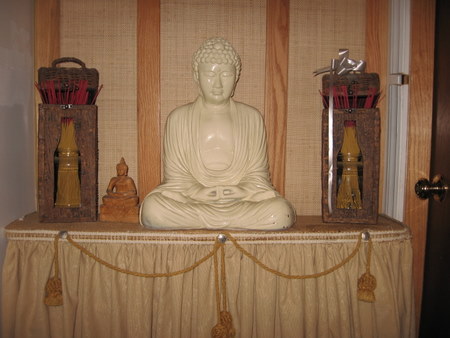